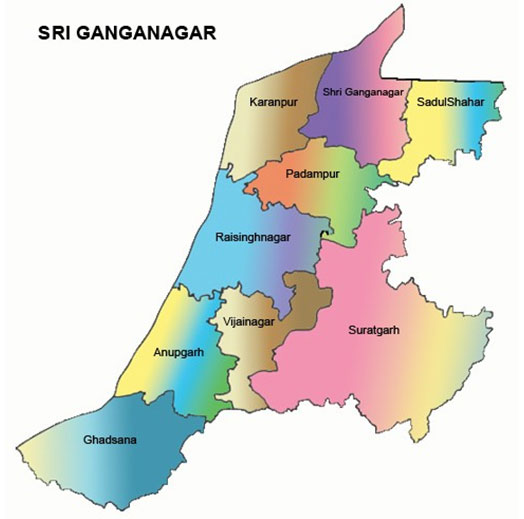 Sriganganagar is situated in the north – western part of India between 28.4o to 30.3o N latitude and 72.3o to 75.3oE longitude and at 175.6 meters height above mean sea level. As per the agroclimatic zones of Rajasthan it has been designated as Irrigated North Western Plain Zone- 1b. Geographical Zone- 1b forms North West part of ‘Thar’ desert and comprised of arid and semi arid areas but agroclimatic conditions are quite different from the neighboring areas of Haryana and Punjab. Sri Ganganagar district has four micro-farming situations (i) Plain irrigated sandy loam soils, (ii) Ghaggar Flood & Clay soils, (iii) Rainfed & Sandy soils, (iv) Salt affected soils. The zone has extreme climatic conditions with scorching summer, cold winter and mild rainy season. Dust storm during summer, frosty winter night and ground fog are some of the typical features of weather and rainfall is relatively low in western part as compared to eastern part of the zone. The mean rainfall in zone is 32.6 cm of which 75 per cent is received in the month of July to September. The temperature of this zone fluctuates from as low as 0.0oC to as high as 49.0o C. January is the coldest and June is the hottest month of the year.

The district has extreme climatic conditions with the scorching summer, clod winter and mild rainy season. Dust stroms during summer, frosty winter nights and ground fog are some of the typical features of weather hazards. The total rainfall is ranged from 185 to 590 mm during the period 1980 to 2001 with the average value of 332 mm. On an average 75 per cent of the total rainfall received from June to September. The temperature fluctuates from as low as 1 o C to as high as 48 o C. June is the hottest month and January is the coldest month of the year. The average monthly pan evaporation fluctuates from 49.4 mm in December to 337.6 mm in May with annual value of 1865.7 mm.


Area, Production and Productivity of major crops cultivated in the district


Production and productivity of livestock, Poultry, Fisheries etc. in the District

This situation is spread over about 45 per of the net sown area. It covers the northern most belt of Ganganagar, Sadulshar, Padampur, Srikaranpur, Suratgarh (part-1), Anoopgarh (part-1) and Raisingnagar (part-1) tehsils. The soils in general are deep to very deep, fall in the command area of Gang, Bhakra and Indira Gandhi Canal. The soils have derived from alluvium of Shivaliks of Himalalayan origin. At places this alluvium has been deeply buried by the alloying and is not visible now. The alluvium is characteristically of highly variable texture, dominantly loamy sand to sandy loam in texture and well drained. The upper soil layer may or may not be calcareous but at the lower horizons they are calcareous with accumulation of Kankar nodules and lime. These soils are generally productive. Topography is almost flat. According to taxonomic system of classification these soils have been placed under the great soil group of torripsamment.

The major crops grown are cotton, guar and pulses in kharif and wheat, gram and mustard during Rabi. The fertility status indicates that soils are poor in organic matter and nitrogen status is very low. Phosphorous content is low to medium, whereas potash content is medium to high. The water table in Gang command area is about 10 m near the canal and about 20 m as we move away from canal. The water table is rising every year rapidly and may cause serious hazards to the productivity to agricultural land in due course of time. The ground water is saline which can be used in conjunction with canal water. Salinity/ alkalinity problem is also met with in few patches which needs reclamation.

The crop productivities in this irrigated situation is very low in comparison to the adjoining state. The major emphasis has to be given on increasing productivities through better management and research on the specific problems such as to find out crops alternative to wheat to replace cotton-wheat rotation to some extent and to work on herbicides and defoliants. Cotton planting and picking machines are the requirements from the agricultural engineering angle. As regards plant protection, effective control measures against most devasting pests and diseases viz; bollworm complex, jassid, whitefly and root rot in cotton; painted bug, leaf eater, aphid and white rust in mustard; white grub and collar rot in groundnut are to be developed.

The flood plain soils are confined to Ghaggar bed area, which are yellowish brown in colour, loam to silty loam in texture with massive or blocky structure and are calcareous in nature. Strifcation is common in soils. The soils vary in their characteristics at short distances. At many places they are intermixed with sandy material. Permeability and drainage conditions of these soils ranges from moderate to poor. Salinity and alkalinity problem is wide spread in patches and generally they have very high conmtents of salts and high exchangeable sodium. Occurrence of flood damage in the Ghaggar bed is quite common and intensity and duration depends on the amount of run off received from catchment area in Punjab and Haryana. Ghaggar flood plains are dominantly present near Anoopgarh and Suratgarh tehsils. These soils are included in torrifluvent according to taxonomic classification.

Paddy based cropping system is quite common on these soils. Paddy in kharif and wheat, mustard and chickpea in rabi are grown in this belt. Paddy although is grown successfully on these soils but per hectare production is very low as compared to adjoining states. Paddy and wheat both the crops respond to zinc application. Chickpea and mustard are grown on the conserved as well as profile soil moisture. Sometimes the sowing of the crops has to be delayed because soils do not come to proper tilth as flood water remains standing on the soil for a quite long time. Hence, there is a need to develop a complete technology for utilizing these soils for profitable crop production.

The major constraints in the crop production are salt content, poor physical condition of the soils and inadequate use of nutrients. Crop production can be improved by developing technology for soil and water management specific to the situation, determining macro or micro-nutrients of crops, or selecting proper varieties. Development of suitable management strategies for cutworm, pod borer, root rot and Ascochyta blight in chickpea, root plant hopper, leaf hopper and shoot barer in paddy; and army worm are imperative from plant protection angle.

The farming situation third occupies about 40% of the net sown area. These soils are originated through aeollian deposition of fine sand and loamy sand of varying heights. The soils, upto one meter height are cultivable. The dune height generally goes as high as 5 to 10 meter and occasionally it is 20-30 meter. The fine textured sand is drifted easily by winds of high velocity and deposited in top soils of the interdunal flats. The surface terrain is highly undulating where slop reaches even upto 10 to 20 per cent. The surface infiltration and sub-soil permeability are excessive. These soils are highly susceptible too wind erosion and drought. The texture of surface soils very from sand to loamy sand. These soils are classified as arid sols and calciorthids. Lime concretions is found at varying depth in varied percentage in these soils. The major problems of these soils are high permeability due to coarse texture, low water holding capacity, drought ness and nutrients losses. Therefore, for better crop production on these soils, the in situ moisture conservation, soil management and crop management technology have to be developed. Cluster bean, pearl millet and pulses are grown in kharif season and chickpea, taramira and wheat in rabi. If rain occurs, single cropping is possible, mostly in kharif season. Gram is grown in rabi season on conserved soil moisture.

Studies on small watershed hydrology with special reference to soil moisture conservation and rainfall harvesting should be initiated in this AES.

The major field crops of the district are as fallow